Techorama talk: the making of (part 2)

CSharpWars is not a hardcore game that needs real-time server/client communication, so I opted for a very simple approach of using HTTP APIs for communication between the game front-end and the back-end. The state of the game world will be stored inside a relational database, with entities like Player and Bot, and will only be updated by the processing middleware once every two seconds.  The processing middleware takes the scripts from the database, compiles, initializes and later runs them for all robots in parallel. If the game front-end polls the game state once every two seconds, animating the assets between their previous and current state should be sufficient.

The relational database will contain a list of robots, storing their state, and a list of players, grouping their deployed robots. When deploying a robot, a player needs to provide a C# script to define the behavior of the robot. This C# script is only needed once by the processing middleware and is therefore accessed using a separate entity. It is however stored in the same table as the robot state itself. 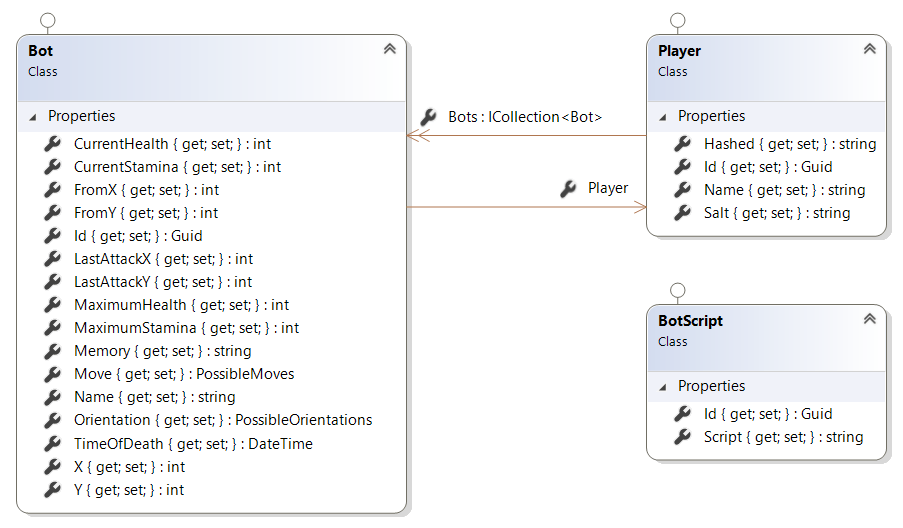 Because I want to use this project to play around with .NET Core 3, ASP.NET Core WebAPI is my choice as the technology for the HTTP APIs. The only important component that will use the HTTP API for now, is the game front-end. Because of this, only an endpoint on the robot entity is required. This endpoint will return all active robots, which are robots that have not died, or that have died within the last 10 seconds. The game front-end needs these 10 seconds to animate the death of the robot because face it: we like to see virtual robots die! In the future, multiple arenas will be supported. Right now, the arena endpoint will always return a single arena instance with a predefined width and height.

The ASP.NET Core 3 application is dockerized and runs on a Linux based Synology NAS for demo purposes.

Fetching and storing data in the relational database is performed by Entity Framework Core 3. A table for players and a table for robots are mapped to Player, Bot and BotScript entities. Nothing fancy there.

Just for the fun of it, Microsoft SQL Server from a Docker Container also runs on the same Synology NAS.